In a nutshell: Foldable drones are a nice – and increasingly popular – variation of the genre, giving you a flying camera that’s easily portable.

Here are three great options you should consider – in the absence of the recalled GoPro Karma.

With its four arms tucked away, the Zerotech Dobby fits in the palm of your hand. Weighing just 199g, it’s more serious than a toy chopper but not as substantial – or pricey – as DJI’s drones.

Despite its size, it still packs a 4k camera, 1080p HD stabilized video, and a few other goodies like facial recognition so that it can follow you around and serve as a selfie drone.

As evident by now, Dobby is a selfie drone and does not come with any kind of remote controller/transmitter and is purely operated with the app – the control distance is 100 meters in open area with no obstacles, when the drone goes beyond the operating frequency, it auto returns itself.

The front of the Dobby Drone has a single camera that can be set into one of four positions before flying. The compact design means a motorized camera [on a gimbal] isn’t viable, but the small size of the drone means you can get in tighter and closer than on a larger UAV.

Sure, Parrot’s family of MiniDrones start at around $150, but the cameras on those are almost unusable. Video quality on the Dobby isn’t exactly amazing either, but it’s far from terrible. I’d say it’s a step or two down from the quality you’d get on a flagship smartphone these days, but more than adequate for social media. However, I found images were occasionally a bit soft in terms of focus. Depending on the light that you’re shooting in, you might see exposure change mid-flight, which can be a bit jarring.

As fun as Dobby is to play with, it’s let down by a comparatively short battery life; each battery will only give you about nine minutes per charge. This is cut shorter due to the fact the drone automatically lands itself when you’ve got about 15 percent charge left, presumably to prevent it from suddenly falling out of the sky. In some cases, we only got about five minutes of flight time before we had to stop flying and swap battery.

With 15 reviews on Zerotech’s Amazon page, this drone now has an average rating of 4.5 out of 5.

Perfect, stable, and convenient. I’m really pleased with this drone. It feels like everything has been thought out. The GPS and other ways that the drone stays locked in place are very good. Best of all, it fits in my pocket easily and I can use my cellphone (always on me anyway) to control it.

Done a lot of research and compared it with Yuneec, Hover, and other small camera drones, but I finally decided to buy Dobby. (Mavic is great but it is kind of for professional users.) Pocket-sized and GPS positioning for outdoor flying are the two things attract me most. 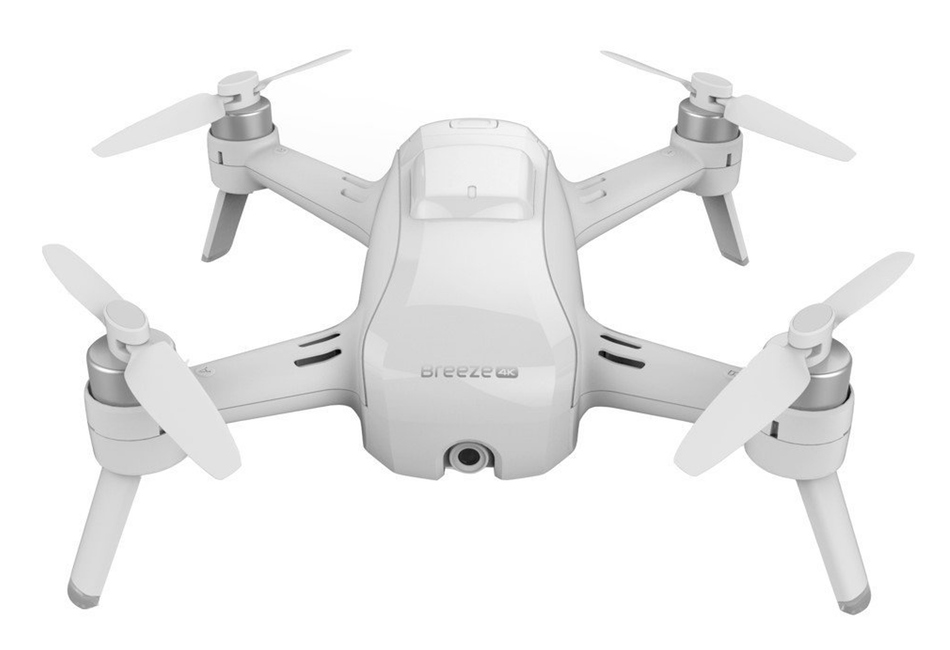 Yuneec is making a name for itself with a range of drones that perform well but cost less than half of DJI’s.

The Yuneec Breeze, much bigger than the Zerotech Dobby, weighs around 400g and isn’t so foldable – only the propellers tuck in. So you won’t be pocketing this thing. But it does boast 4K videos.

Despite the size difference, its purpose is the same as the Dobby, and many of the software features are similar.

The mobile app, available for iOS and Android, is split into two sections: Tasks and Gallery. Tap on Tasks and you’re given five options to choose from: Pilot, Selfie, Orbit, Journey, and Follow Me. Pilot has the manual controls for flying around the way any other drone would with a regular controller.

After crashing it a half dozen times, we were pleased to discover that it’s actually pretty damn durable. We bashed it (inadvertently) into all manner of obstacles — bushes, branches, tree trunks, and even the side of a car — but in none of those instances did the drone become so damaged that it couldn’t start right up again.

As far as we can tell, the key to the Breeze’s resilience is its clever hinged props. it appears that Yuneec outfitted the drone with this feature so that the props could be folded inward for easy transport, but based on our observations, it seems that they also help the drone recover from run-ins with tree branches quite effectively. Instead of breaking on contact, they pivot backward ever so slightly, which seems to prevent them from snapping.

I did find a tendency for it to drift around disconcertingly on occasion, forcing me at one point to swiftly hit the land button before a nearby rosebush got an unscheduled trimming. And, as with most drones, GPS means you can simply tap a “return-to-home” button when you want to bring the Breeze automatically back to its take-off point.

JimFeet says that gusty winds approaching 10mph [16 kph] can cause issues, but praises the Breeze.

I’ve found the Yuneec Breeze to be an excellent product in nearly all regards. While it may not be the most advanced, fastest or highest resolution camera, it flies well, is stable and easy to control with an iOS device. As a heavy Canon user with a 51 mpx DSLR, in my opinion the photos are of excellent quality. I have played with the video and found it to be excellent as well but video is not my forte so I may not be the best judge. The Breeze folds up and fits into its hard plastic case, making it easy to transport even in a hiking day pack.

Shannon S finds it to be a “good product with some noticeable benefits and drawbacks.”

The video camera is not great in low light. Without a gimbal there’s just too much blur. There is slight blur when panning on video even in daylight. This thing is surprisingly stable in the air, so one thing you obviously want to do is send it up high and take a panoramic video of your surroundings.

I can easily use it indoors, which, initially scared me, but sure enough it was much easier than I imagined. 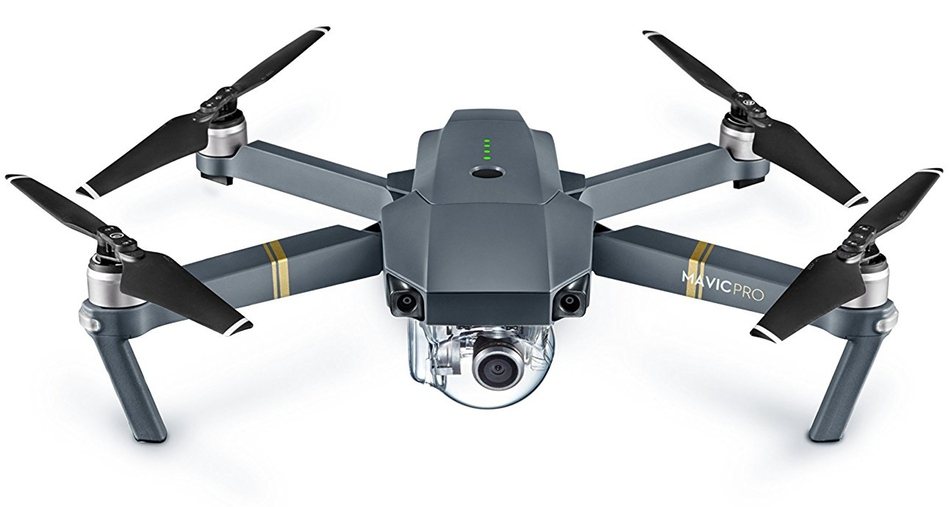 Like with the MackBook Pro, the “pro” in the name means this is serious business – and entails an astonishing price tag.

Still, it’s essentially as easy to fly as the others on this list.

It’s no flyweight at 720g, but it’s nimbler than DJI’s other offerings – and remember it’s foldable. The range on this thing is amazing – up to 7km, if you dare go that far with the battery life.

Assuming you’re using the controller and not just the smartphone, you’ll do most of your flying with the control sticks, while you’ll manipulate the drone’s more advanced settings through your phone. The Mavic Pro flies smoothly and is pleasantly easy to maneuver. When you take your fingers off the sticks, it hovers steadily in place (we tested it on a day with almost no wind, it’s unclear how the Mavic might do on a blustery day). That’s especially helpful for lining up precise shots.

The camera and gimbal are very similar to what you find on the Phantom, only smaller. The camera uses the same sensor, shooting 4K video and 12 megapixel stills. The only difference is that the Mavic Pro doesn’t have as wide a field of view as the Phantom. The Mavic Pro does have the same forward-facing optical sensors as the Phantom 4, though, allowing it to detect obstacles and autonomously avoid crashes.

While it might not have the power to cut through really strong winds (DJI says it can handle winds up to 19-24 mph or 29-38 kph), it was able to keep the camera stable and fly steady in 10-15 mph winds and still get between 22-25 minutes of flight time before it landed itself. It does warn you when the winds are too strong for its motors, too.

Squatch LOVES Milo enthuses that it “does everything the Phantom 4 does but in a much smaller package.”

I pulled the Mavic out of the box and immediately realized how little this thing is compared to my Phantoms. Its size is definitely going to be the draw for most people (it’s small enough to fit in a shoulder camera bag, making it way more portable and comfortable to tote around than my Phantom 4). The four arms are all folded up into the body, making it about the size of a water bottle (slightly bigger) in its portable state.

Good Amazon Customer, an experienced RC hobbyist and drone pilot, is a convert.

I took a couple flights in high winds – 18 mph [29 kph] – and it worked perfectly. The camera is tiny, but of very high quality, probably equal to or better than most drones on the market (I think the Phantom 4 cam may be slightly better though).

That buyer adds some advice for newbies:

Word of warning though, these are not for beginners. No expensive camera drone is. Do your homework and spend time learning on smaller drones. Maybe buy a lower-priced camera drone and learn the ropes. Then get a Mavic Pro.